Thrash out of Hell: Exodus - Blood In Blood Out-Tour 2016

For more than 35 years now, Exodus, the thrash metal rockers from the legendary Bay Area, get tons of hair flowing and flying through the air. In March 2016, they visited Munich as the first German city of their “Blood In Blood Out” Tour. Supporting the thrash behemoth were Lost Society, an aspiring up-and-coming thrash metal band from Finland.

At 8 pm, Lost Society began the thrash metal night at Backstage on Easter Monday. The quartet around vocalist and guitarist Samy Elbanna got the party going right from the start and carried the crowd - which was by the way age-wise just as well-mixed as the bands of the evening - along. The energy of the four Finns was not just audible but also palpable and visible as they were running around on stage like scared up chicken. No surprise, as they played one fast song after another and hit the bull’s eye with it. The full venue was on fire and it felt like sweat was dripping from the ceiling. Hopefully, the crowd wouldn’t be too tired for the main act if the night.
In case anyone had thought the guitarists were unable to keep up playing up-tempo, they were proven wrong. Especially their solos, where you could only see fingers flying on guitar necks, were breathtaking. In between, the four musicians also played a slower song which was just as great as the rest of the set. There was no way to overhear the audience screaming for an encore after this amazing performance. Clearly thankful, Lost Society bowed themselves off stage with a wall of death and a huge mosh pit.
No doubt why Exodus had taken these Finns on tour with them: The thrash metal scene needs such a young, motivated and talented band that was the perfect supporting act for legends like Exodus.

The short break was much appreciated by all of the approximately 400 sweating metal heads. Some fresh air was definitely needed. Then, Exodus finally hit the stage. In the manner of their tour title, the thrash metal band began their show just like their new album with “Black 13”, followed by “Blood In Blood Out”. Despite that fact that Exodus had to play this tour without Gary Holt, they easily managed to turn their fans ecstatic. No head was still once the thrasher from California around their ex- and rejoined vocalist Steve “Zetro” Souza began their performance. They played song after song as if the world stopped spinning tonight.
No one recognized the 35 years of band history when Exodus played highlights like “Children of a Worthless God”, “Blacklist” or “War Is My Sheppard” - they were not a tiny bit quieter or less powerful. The fans thanked them with one circle pit or mosh pit after another which were only outdone by the wall of death that followed afterwards. Here and there a smile hushed over a metal head’s face this evening.
Naturally, crowd surfers were far from short - nothing unexpected at such a great show. Next to the diversified and well thought-through set list, encore was terrific as well. “Bonded by Blood”, “The Toxic Waltz” and “Strike of the Beast” topped off this incredibly impressive thrash metal evening that was celebrated with loud exultations and metal horns. Even after 35 years, Exodus know how to make metal hearts leap for joy. These are the concerts that are worth every cent and that will remain in our memories and hearts forever. 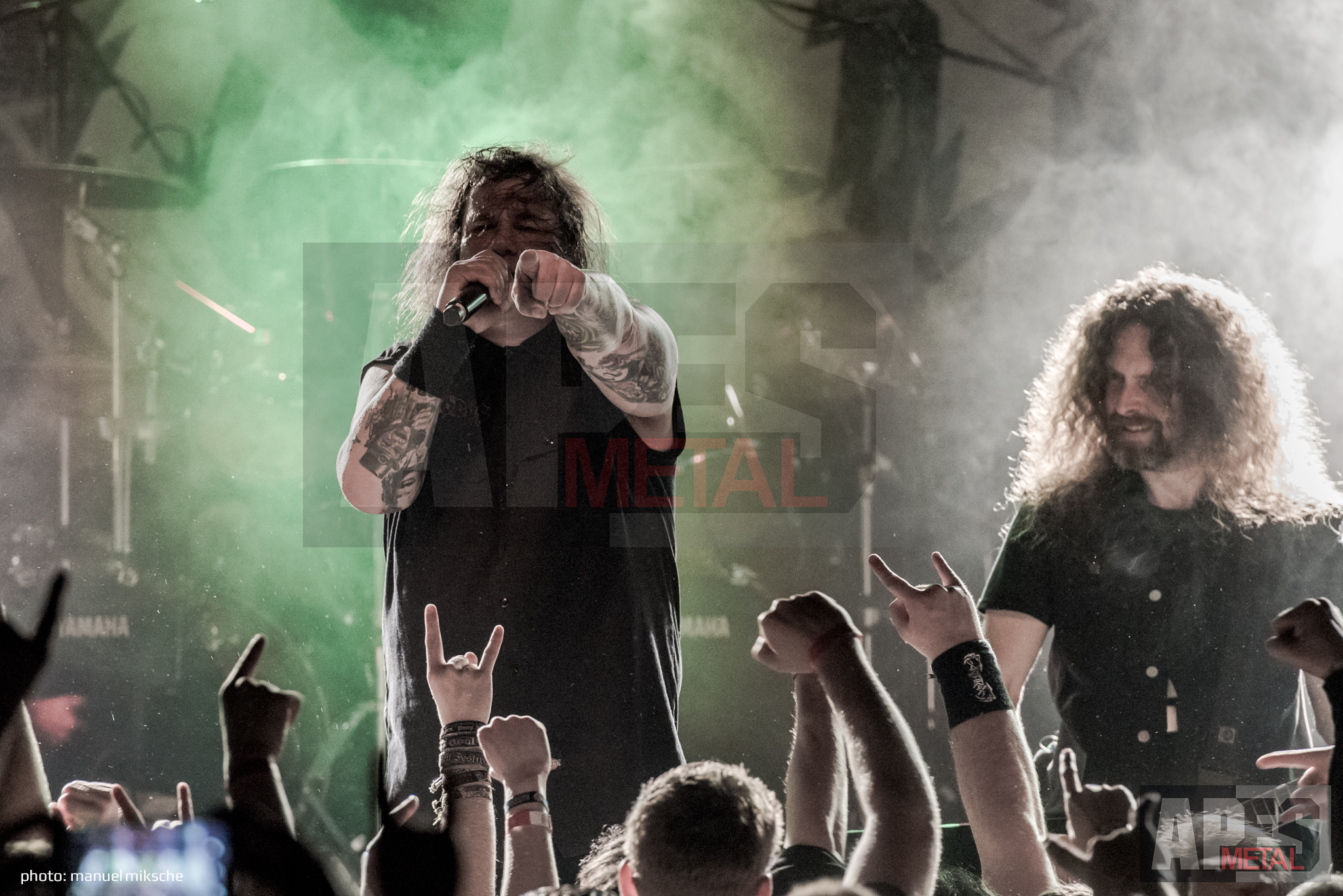