The first headliner tour of shooting stars Beyond The Black is coming to an end. But before it’s well and truly over, the metal band made their way to Backstage Werk in Munich. Supporting them were InLegend and Masterplan.

Opening act of the evening were InLegend, a piano rock band surrounding Van Canto drummer Bastian Emig. For about 30 minutes the band played in front of the only half-full venue, not really able to amaze the audience. From the beginning, Bastian Emig tried to fire it up but couldn’t really get through to the listeners. Sure, they were only the first band to play but the reserved reactions by the audience were also due to the rather plane songs. InLegend’s unconventional instrumentation - no guitarists, instead they partly played their songs with two pianos - might have been too innovative to win the crowd over. Taken together, their show was good with great piano parts that showed their musical talent, but not exceptional. A nice start into the night.

After a short break, the German power metal band Masterplan hit the stage. The venue at Backstage was notably fuller at this point and the air was filled with more anticipation. Vocalist Rick Altzi could easily animate the audience right from the start. No surprise, as Masterplan played a classic, sweeping show, honoring the entire power metal scene. A vigorous voice that was accompanied by strong guitar riffs and solos led through their set list. Still, lots of people in the audience seemed unimpressed which was truly a shame considering this performance. Maybe they were just irritated by the keyboarder’s bright red boots à la Ted Mosby. Fans who were able to ignore these boots, saw an all around great show. Masterplan’s new song “Crimson Rider” basically put the performance into a nutshell: powerful, sweeping and majestic at the same time. Rick Altzi and co. surely don’t have to hide!
The final applause at the end of the performance was fair but bears no relationship to the excellent performance Masterplan showed this evening.

About 20 minutes later, waiting was finally over. The classic intro played at all Beyond The Black shows resounded. The venue burst at the seams and the audience waited full of anticipation for the band from Mannheim, Germany, to get on stage. “Numb” was the first song of the approximately 100 minute lasting set. From the first second on, the crowd was finally enthralled and cheered strikingly. If anyone had had doubts before, after the first song it was clear to everyone why the symphonic metal band around vocalist Jennifer Haben is already on their first headliner tour - after being founded in 2014. The 20 year-old singer performed astonishingly with tons of energy, despite not being in the best of health. Her petite appearance is misleading considering the incredible stage presence and a voice that enchanted the entire building.
Next to singer Jennifer, guitarists Christopher Hummels and Nils Lesser, Erwin Schmidt on the bass guitar, drummer Tobias Derer and Michael Hauser playing the keyboard complete the band. When it comes to musical talent, fun on stage and commitment, they are in no way inferior to their front woman. With their second song “Fall Into The Flames”, Beyond The Black created goose bumps - not least because of Jennifer Haben’s fairytale-like voice. No surprise the entire venue trembled.
Songs like “Pearl In A World Of Dirt” made the crowd freak out further as it felt like they were taken on a journey to another, enchanted world. While keyboarder Michael Hausen played an incredible solo, the stage was prepared for the next song “Love Me Forever”. For this performance, Jennifer herself played the keyboard and charmed the audience with her sweet voice and talent that clearly match her beauty.
Afterwards, the symphonic metal band played the Wacken hymn, paying homage to the gods of the annual metal festival in Northern Germany. A special part of the show this evening was the performance of “Sacrifice”. With this Saxon cover, Beyond The Black didn’t only appreciate being the support act for Saxon during their England tour but also showed how versatile they are. It was no big deal for them to amaze their fans with this classical heavy metal song just like they do with their own songs. With “Songs of Love and Death” the rockers end the main part of the evening. Luckily, this was not the end of the show as the band had reserved their best and most anticipated songs for their encore. With “Unbroken”, “Hallelujah” and “Running to the Edge” Beyond The Black rocked the venue one last time and left the audience in excitement, amazement and sadness that this concert was already over. One thing is clear: This was not the last time we heard about Beyond The Black. The band showed an amazing stage presence and a sweeping performance. Even skeptics became fans that night. The feeling that a band could play forever is rare but Beyond The Black had no problem creating it.
It will be interesting to find out what the future has in store for the six musicians but no doubt they have the potential to play with the ‘big boys’. No need to hide behind bands like Nightwish or Within Temptation.

Pictures of Beyond The Black
More BTB here 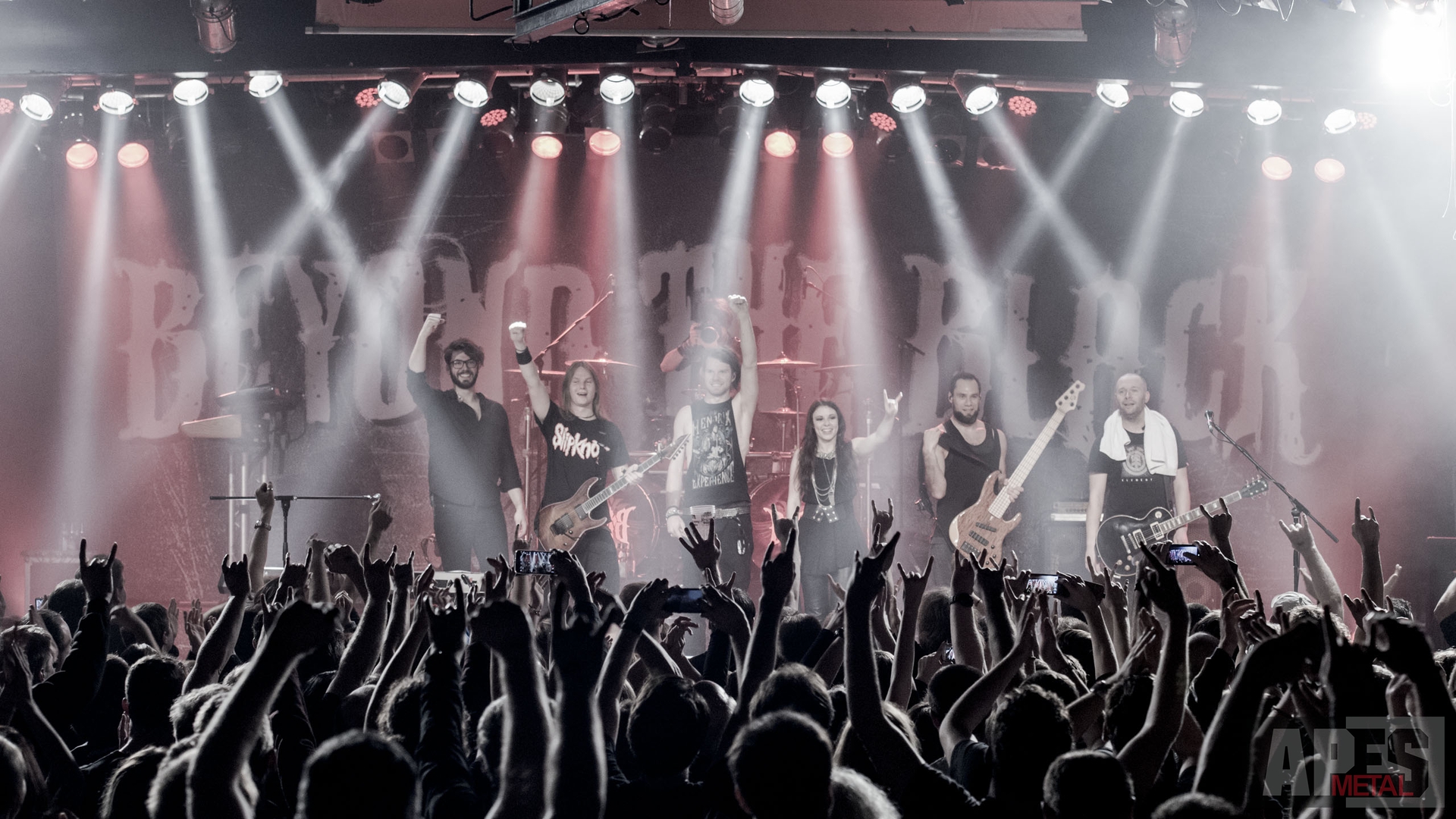