The KREATOR has returned at the Tonhalle, Munich

Saturday, December 13th 2014 - The KREATOR has returned at the Tonhalle, Munich.

You could have guessed that with a line-up like this it would only be a matter of time until sold out: KREATOR returned to Munich after a two year period of absence and brought three more fantastic bands.


VADER:
The first band this night, starting shortly after 6pm was VADER, one of the biggest acts in the Polish death metal scene. With a line-up like this it's really hard to bring them into an appropriate order at all, but 30 minutes was definitely too short for these guys. VADER nearly stole the show this night, presenting some really sick and brutal death metal. The band worked like a clockwork. The performance was perfect and each second was pure entertainment.
The set included songs like 'Wings' from the fantastic album 'Litany', 'Helleluyah (God is dead)', 'Come and see my Sacrifice' and a new song called 'Hexenkessel'. But all in all this show was just one killer riff after another. VADER raised the bar with their gig and prepared for a very promising night.


SODOM:
Sirenes, gunshots, choppers, a bunch of noise. SODOM -  one third of the big league of Oldschool Teutonic Thrash - got ready for a performance that's going to stick with the audience for a while. As they did multiple times in 2014, they opened with 'Agent Orange' and pretty soon it was clear that this was the secret headliner of the night. The crowd was fully with them from beginning to end.
To everyone's delight, the focus of the setlist was clearly set on the old stuff. The second song was 'Remeber the Fallen' and later on we got 'Tired and Red', 'Outbreak of Evil', 'Surfin' Bird' as well as 'Sacred Warpath', their latest release. The band couldn't pause a single time between songs without the audience bursting into wild cheering and chanting SODOM. This is how you do a Metal show with the perfect atmosphere!
The performance wasn't free of mistakes at all but by the time it got close to ending with 'Sodomy and Lust' and 'Blasphemer' everybody has had one hell of a time, including the band itself.


ARCH ENEMY:
The previous blazes of brutal, high speed Death Metal and rough Oldschool Thrash made the guys and the girl from Sweden look a little out of place to some. It almost felt like Soft Rock in comparison but ARCH ENEMY couldn't be deterred by that and gave a real blast of a show. Who doesn't love a bit of variety after all?
They got supported by Jeff Loomis (Nevermore) on the guitar and Alissa White-Gluz has undoubtedly made it clear that she's a worthy new vocalist for this band for a long time now.
What happened now was typical, yet refreshing ARCH ENEMY sound. The mood was driving and moving nonstop, the guitars alternated between ultimate bang-your-head riffs and epic melodies and the vocals offered a whole lot of marvelous grunting and squeeling.
The setlist included everything the common ARCH ENEMY fan could ask for. 'Blood-Stained Cross', 'War Eternal', 'Dead Eyes see no Future' as well as 'We will rise' and 'Nemesis' must have fulfilled every last wish except for those of some die-hard fans maybe.


Setlist:
Intro
War Eternal
Ravenous
My Apocalypse
You will know my Name
Blood Stained Cross
As the Pages burn
Dead Eyes see no Future
No Gods no Masters
We will Rise
Nemesis
Outro (Fields of Desolation)


KREATOR:
Without a doubt, the main reason for the sold-out this night and one of the biggest names in the German metal scene is KREATOR. And now they set up the stage for an extravagant show. There was all kinds of eyecandy: A new, spectacular light show, big screens, Flamethrowers and war banners.
Since the KREATOR seems to dig using unseemingly, odd oldies as intros, 'In the year 2525' now prepared the crowd for the coming of the Thrash-gods from Essen. One more intro ('The Patriarch') finally tore apart the tension as 'Violent Revolution' invoked some pretty intense headbanging action. Even though the audience by now already has had more than four hours of metal (and waiting of course), there was still violence and motion beyond belief. By the way, thanks mainly to the location probably, the stage sound was bliss at this show as well as the three previous ones.
Once again, KREATOR proved that they're still pretty high up there and it's going to take a while until any other bands can even compare. They had total control over the crowd and played a show that filled all the metal hearts in the venue with aggressive, violent joy. Titles like 'Hordes of Chaos', 'Enemy of God', 'Suicide Terrorist' and 'Pleasure to Kill' are case in point: This is where worldclass riffing and pure hate team up and form timeless songs that basically crush everything. You got the guitar playing of Sami Yli-Sirniö giving you goosebumps, you got the insane drumming of Jürgen Reil that takes Thrash Metal to a new level and you got the vocals of Miland Petrozza which is just more brutality than some can even handle.
For the most part, Mille refrained from drawn-out speeches, except for the usual stuff. During 'Hordes of Chaos' sparkly confetti was shot all over the crowd, which probably was supposed to slowly prepare it for the show to come to an end soon. But before it was over, we still got a nice, funny interpretation of Iron Maiden's 'The Number of the Beast', as well as the classics 'Flag of Hate' and 'Tormentor'. True to form, you could say. KREATOR's form also includes topping the incredible sound you get on album by far each and every time you see them live on stage. It's just amazing, really.
Now this was a whole lot of metal for one night. But seeing KREATOR live is something that anybody who claims to be at least a little bit fond of Metal can never do too many times. 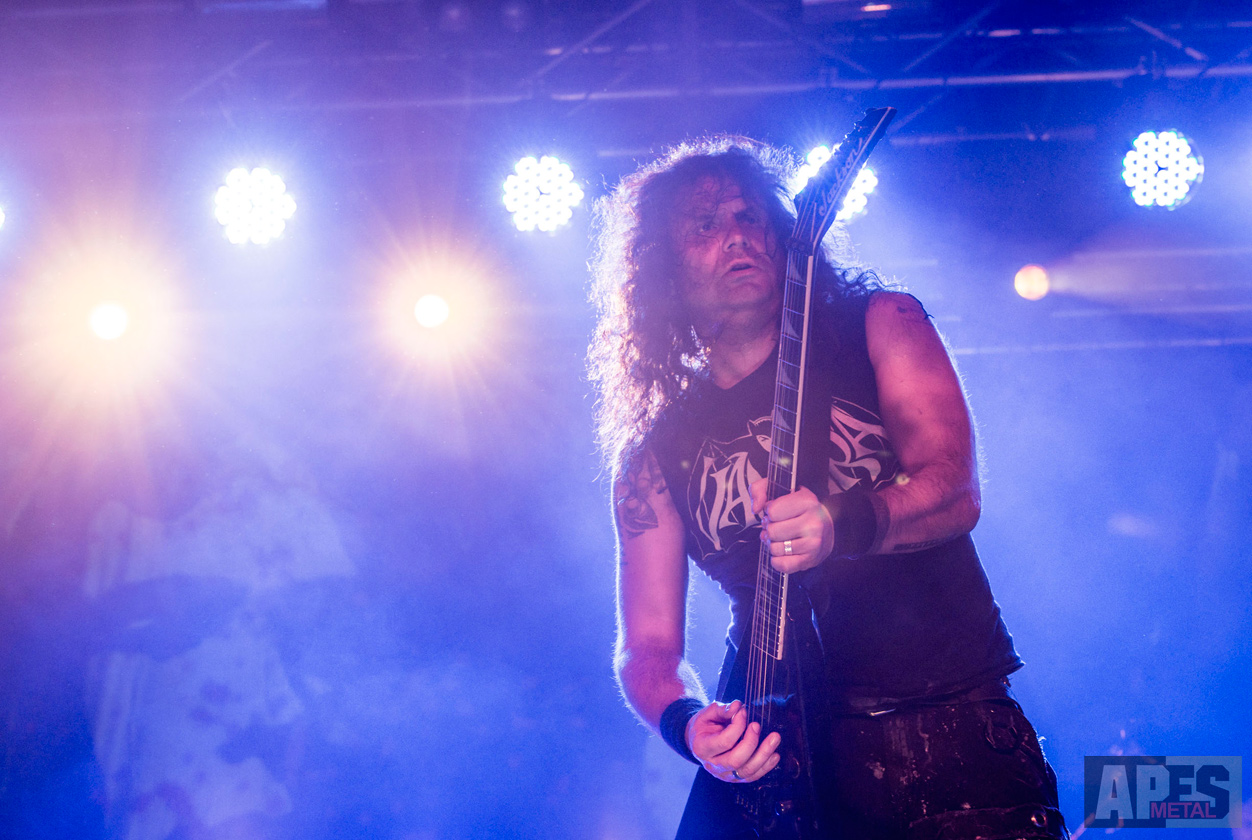 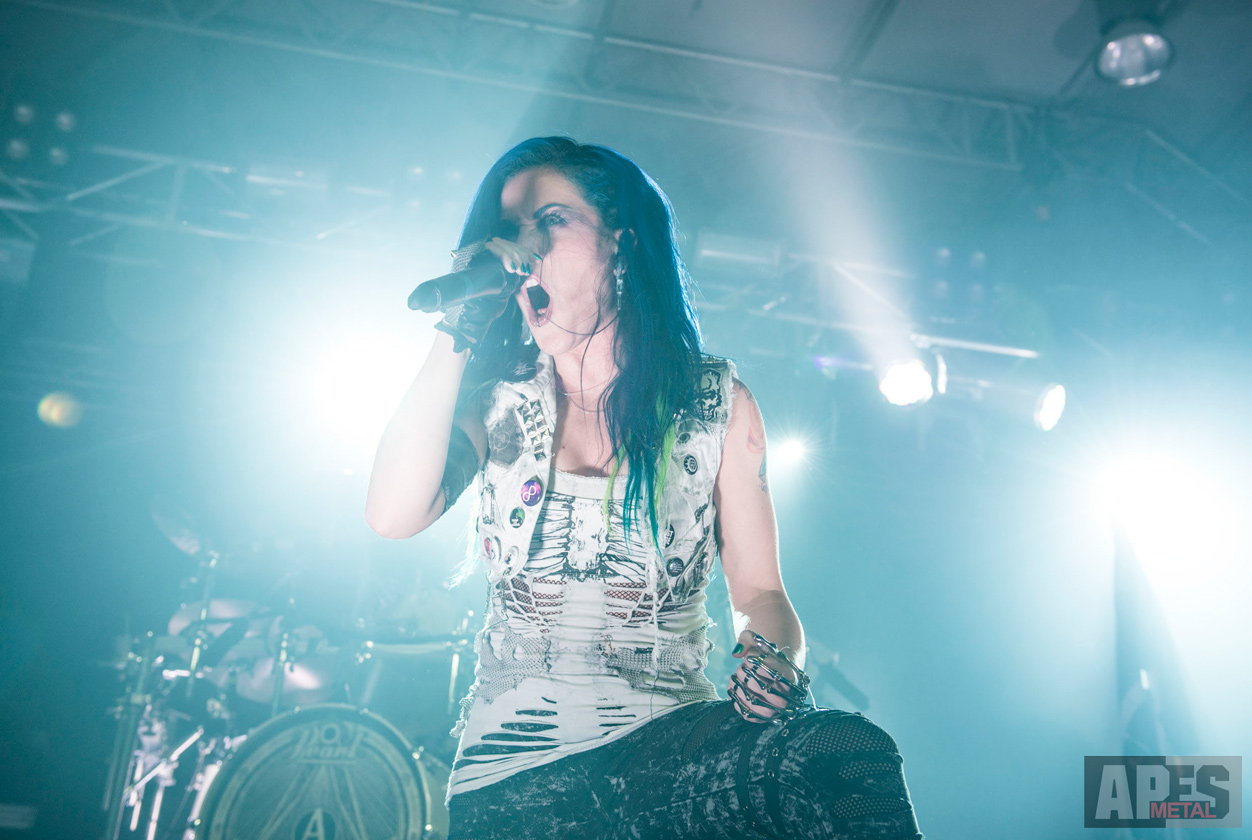