Ruhrpott Metal Meeting 2017: Triple Thrash and delicacies for your ears

With DESPAIR and ONKEL TOM new Line Up for Newcomer "Flöz"-Stage confirmed!

RUHRPOTT METAL MEETING, in third edition already on Dec 8th and 9th this year, becomes a big Festival Highlight for 2017! Also this time the second, so-called Flöz-Stage will feature regional bands. The final line up for this stage was now announced, including a Live-Set of Thrasher-Originals DESPAIR from Dortmund.

For two days Oberhausen’s Turbinenhalle will once again turn into the region’s largest indoor Metal festival. In addition to seeing the numerous bands the visitors can look forward to a Metal market, a large indoor beer garden and the so-called FLÖZ Stage. This stage is reserved for regional "Ruhrpott" bands only. Why "Flöz"? A Flöz is in the slang of coal-miners for an inseam mining – in this case coal, the gold of the Ruhrgebiet. But this stage doesn’t only hold well-known regional classics but also offers a platform to young regional artists at the same time. Therefore the organizer team assembled a line-up for this stage, which lives up to its name.

WIZARD from Bocholt, who perfected their idea of classic Heavy Metal on their new album Fallen Kings, will lead the way. After this perfect Opening, UNIVERSE will enter the stage – true Hardrock with maximum live quality since 1985. Chris Richter and Co. will deliver an absolute cracking set on stage which will enrich the 80s energy with modern elements. After that we’ll say "Make way for" PHANTOM CORPORATION, who could demonstrate their skills on countless regional stages already. Classic Crust joins in-your-face hardcore attitude – a must see! ERAZOR carry on with high-quality Black Thrash and hold up the heavy temper until the first big surprise of the night will hit the Flöz stage: DESPAIR. The almost forgotten Thrash Band from Dortmund released three records between 1988 and 1992 and affected the local metal scene as well as metal scenes beyond that significantly. Here, big musicians as Waldemar Sorychta (e.g. Grip Inc.) or Markus "Makka" Freiwald (e.g. Sodom) are at work and they will rake over their old coals to fire them up for one more time. Co-founder among others of DESPAIR was Robert Kampf, who would later establish the label Century Media, which is one of the biggest metal labels up until today. Touring with bands such as OVERKILL made the band popular and respected quick until they split up into other bands. Now, these "Old-fellows" find themselves back together, with a new leadsinger, who is none less than Marc Grewe (e.g. Insidious Desease, ex Morgoth), for a live set at RUHRPOTT METAL MEETING.

This year’s main act at Flöz Stage will be ONKEL TOM. Known as the beer drinking master of head banging parties, ONKEL TOM will bring his own Metal versions of old well-known German drinking songs to the stage. His setlist contains drinking hymns such as "Es gibt kein Bier auf Hawai" and "Schnaps, das war sein letztes Wort". Since 1998, the trained pit fitter Tom Angelripper, also known from the band Sodom, plays hard and heavy stages with his unique style.

MAX & IGGOR CAVALERA hold the headlining position with their RETURN TO ROOTS set. The Brazilian brothers, who formed Deathmetal-Prioneers SEPULTURA back in the day, have created musical monuments with songs such as Roots Bloody Roots and Chaos A.D.. With this Live set the brothers celebrate the 20th anniversary of the legendary "ROOTS" album and fulfil their fans long lasting wish to perform this killer album in full length with the original band line-up. There is no better chance to come closer to seeing the old Sepultura! A Must-See!

"Queen Of Metal" – DORO joins the Line-Up as well. The ex-Warlock singer still impresses with her strong voice and legendary hymns, which enthrals the crowd at every show.
Also confirmed are TESTAMENT: Active since the early 1980s, the Thrash-Metal Band from San Francisco Bay Area can look back onto eleven first-class records, among these also their current album Brotherhood of the Snake. Their distinctive sound burned into every Metal fans heart during the last decades.

Get your tickets here. 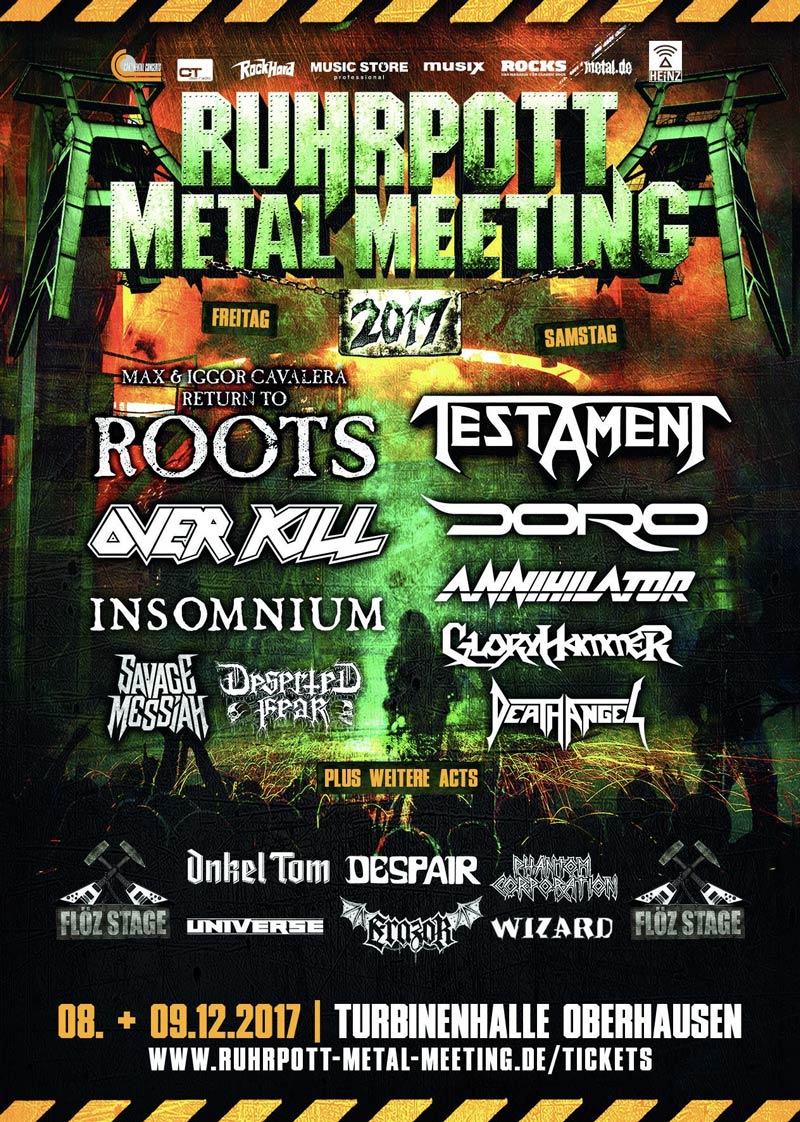