RIP Mötley Crüe - Thanks for 35 years of Glam Metal

It seems, putting Alice Cooper and Mötley Crüe up on stage could not have been more promising than on Friday 13th of November 2015. The Final Tour stopped by at the Zenith, Munich. More than 5000 people had come to enjoy the fiery show from Los Angeles one final time. Although Nikki Sixx and his men have been touring all around the globe since 1981 they do not appear tired – not by a long shot!

Those two legendary bands brought along an opening act: Saint Asonia. Since the US-Canadian quartet had to play already when the doors opened, unfortunately, most of the audience hardly noticed them. Shame, because Adam Gontier (lead vocals) and his boys - Mike Mushok (lead guitar), Corey Lowery (bass) und Rich Beddoe (drums) – had just released their much acclaimed self-titled debut album on 31st July this year. If you want to hear what they sound like or if you’re interested in getting to know this band, just click one of the following links:

I would have loved to present to you some shots of this band in order to introduce them to you. Unfortunately, I had to wait in front of the venue with some of my colleagues until Alice Cooper hit the stage. Next time, guys! (Munich’s always a bit of a difficult location when it comes to bigger shows)

Around 8 pm it was finally time: Alice Cooper entered the stage, framed by a curtain of sparks. He’s one of a few artists who change their clothes more often than Lady Gaga during a concert – and, surely, the one with the most death scenes. Being 67 years old neither means “stop” nor “slow down” for him. Vocally on top of his game, Cooper presents himself more agile and versatile than ever. Songs, such as „No More Mr. Nice Guy“ or „Poison“ are a must-play, of course. Intoned by none other than Nita Strauss, who had replaced Orianthi earlier this year. The girl made her mark as member of The Iron Maidens, amongst others. After one or two more executions, the set ended after approx. 45 minutes with „School’s Out“. Half an hour more wouldn’t have hurt anyone. But, anyway, he was „just“ the supporting act.

The skilled photographer was allowed to observe Mötley Crüe for the duration of two songs from afar (approx. 160 ft.!). The great thing about Mötley Crüe is: they really make it up to you! From 9.45 pm on, the crowd was pushed by fire, explosions and some dancing girls heating up the stage in Munich. For the following 90 minutes the night belonged to glam metal. The back of the stage was completely covered by a wall of LED’s, flanked by pointed, fire-spitting objects reminiscent of tank traps. The microphone was dangling from the ceiling, of course, and was lit up later that evening. No wonder, the whole Zenith was trembling for excitement when the glam metal kings delivered songs like "Girls, Girls, Girls", "Dr. Feeldgood" and the classic "Kickstart My Heart". Weeks of anticipation and waiting (and the countless hours most of the audience have invested in designing their outfits, obviously) were absolutely worth it! Mötley Crüe played a convincing show from beginning to end and let their fans party. A great audience was rewarded with "Home Sweet Home" and a mind-blowing Sinatra-cover of "My Way". After 90 minutes Tommy Lee and his colleagues left the stage and left behind a screaming, shouting, happy crowd. What can I say….a successful farewell-tour! 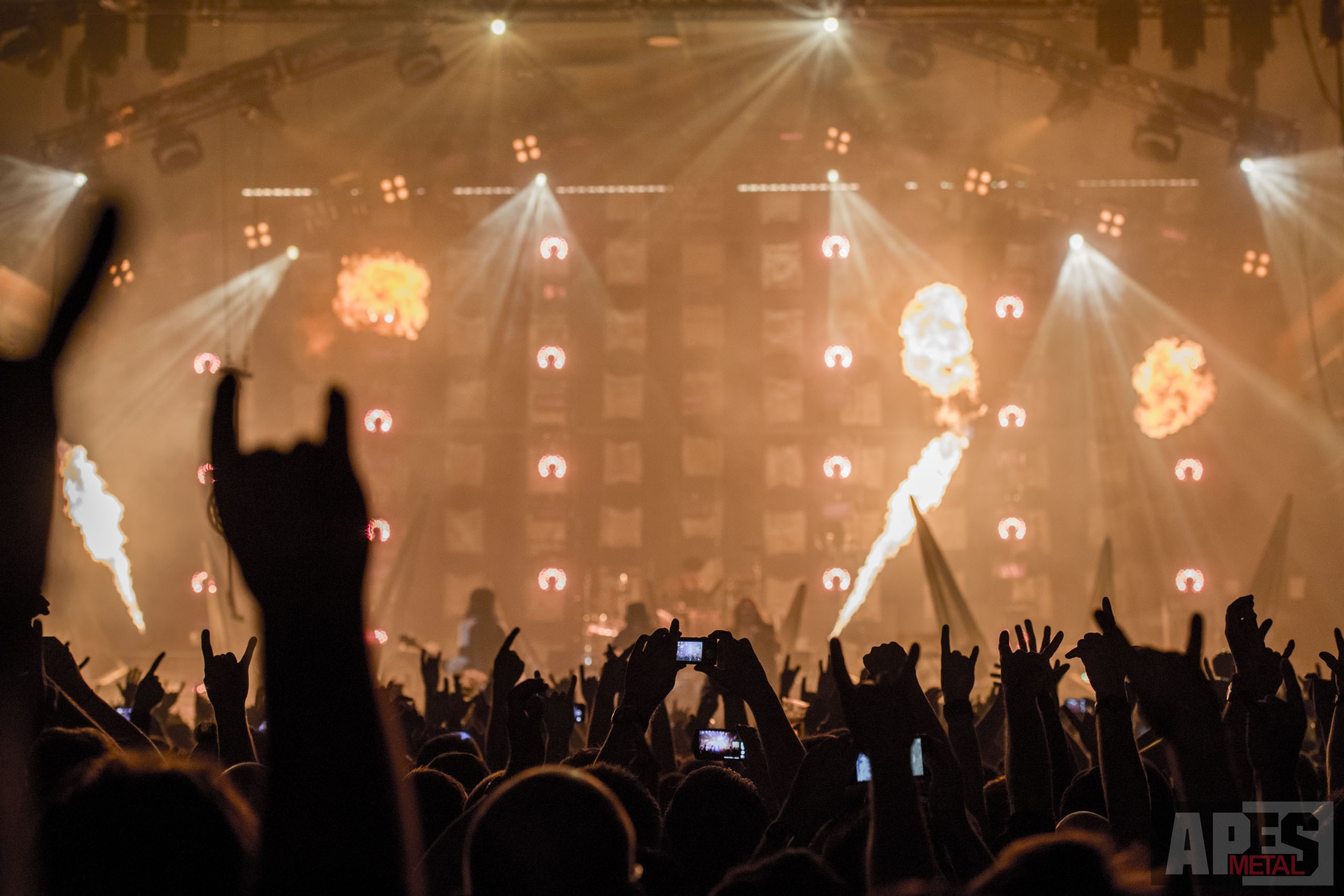