That the Nova Rock Festival is known for absolutely stunning Line-Ups you should all know after 11 years of Rock ‚N‘ Roll in  Austria. But what the organizers dishing out this year is really amazing. Headliners will be Mötley Crüe, Die Toten Hosen and Slipknot. Yep, your right. Slipknot! After their last show dated back to 2008 everyone counted the days until 2015!

From June 12-14, 2015 the Nova Rock will have a lot of new stuff for you guys:
A better and bigger Genuss Arena Burgenland where you can get a taste of delish Austrian food.
The complete staging concept has been overworked. Both main stages will be next to each other with a space of just 200 meters. In the past we ran thousands of miles a day to see our favorite bands.
Sanitary installations also getting better this year. In the last years Nova Rock had just one of these installations, now three (3)!!!

This and a lot of more fucking stuff you can find in our news: http://www.apesmetal.com/en/news/nova-rock-new-site-concept-and-many-more-highlights-in-2015

The most importing thing next to ten thousands of fans for a memorable festival weekand are the bands. With In Flames, Papa Roach, Asking Alexandria, Motörhead, both Lightnight Specials Scooter and Wolfgang Ambros, Five Finger Death PUnch or The Eagles of Death Metal and Parkway Drive the organizers could tempt dozens of stunning bands to the Hungarian border in Austria.
For all of you who don’t like this hard stuff with all the shredding guitars and shoutings there is a colorful mix of other bands in the billing: Madsen, The Gaslight Anthem, Kraftklub, Die Fantastischen Vier, the beautiful Jennifer Rostock and many more are still waiting to blow every sweating bullet out of your face!

With boom! in the next round. Nova Rock #11 is almost there. Just around 60 days to go. Pick up some beer and fasten your seat belts, please! Buy your ticket now! 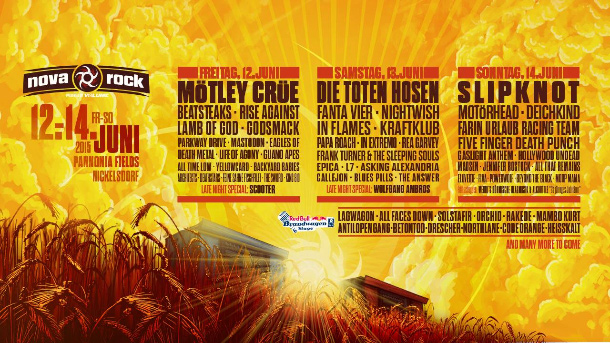