The Music From The Beast Festival takes place in 2016 for the third time. After the first two events is now the renowned Hugenottenhalle in Neu- Isenburg the new home.

For the kick-Of in Neu-Isenburg following artists could be won for the festival:
As headliner we welcome the newcomers of 2015, Beyond The Black. Further, the power metal band Soul Drinker from Stuttgart. In addition, the Dutch symphonic rockers End Of The Dream and the Hessian Hard rockers of revolution Eve.

The 2014 launched Music From The Beast Festival takes place on Saturday, 8 October 2016 after two successful editions in Oberursel, for the first time in Neu-Isenburg Hugenottenhalle instead. The this year edition will be a high-class FeMale Festival. To this, a highlight was with this year’s headliner, Beyond The Black equated. This young band is already after a short time one of the leading bands of their generation and are now an institution on many major festivals.
The in February published CD „Lost I Forever“ boarded in the first week of the 4th place in the German charts and was followed by a complete tour of Germany with the legendary Scorpions in trade.

With End Of The Dream another fantastic symphonic metal is represented at this year’s festival. In your home this band is compared already with the Dutch flagship „Within Temptation“. but her musical class justifies this comparison quite.

As the opener of the festival the Hessian „All-Girl Band“ Revolution Eve will deliver with powerful hard rock, the first musical statement of the evening and catapult the fans in the hall to „Operating“. 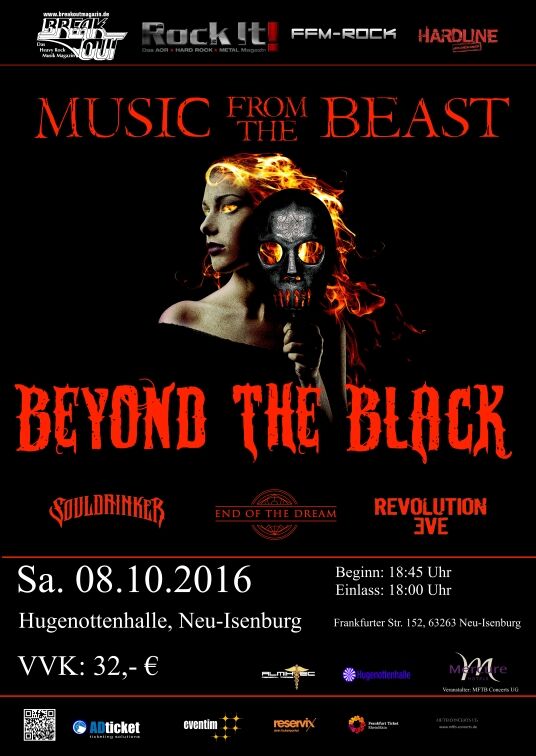