Kataklysm's „Of Ghosts and Gods“ tour in Munich

For 25 years now the Canadian Death-Metal band of Kataklysm jams their songs into our ears. To celebrate this accordingly the band started touring with Aborted and Septicflesh to perform their twelfth studio record "Of Ghosts and Gods". On January 31st the Canadians stopped at Backstag Werk in Munich.

The Belgian Death Metal/Deathcore band Aborted opened for the evening. Creating a barage of sound from the beginning they started shreding. In contrast to other concerts the Werk was already pretty crowded for the frist opening act and already ready to go. Aborted convinced the crowd from the first second on and controlled the mood in the venue so that you didn't have to wait long for the first wall of death. Whoever wasn't in the right mood after the first band was definately at the wrong concert since Aborted literally blasted the stage.

After the Belgians it was Septicflesh's turn, the direct opener for Kataklysm. There was a lot of tension if the Greek Death-Metal combo could keep up the previous niveau. The mood was still heated and the setpiece seemed respective and convincing - what could go wrong? Exactly: Nothing! Septicflesh started - as Aborted before them - shreding brutally and created a crazed mood in the Werk. Already it was clear that this evening was bliss for every Death-Metal heart. The Greek band - themselves veterans of the business - knew how to thrill their audience with their one of a kind sound.

After the two opening acts the tension in the Backstage was tangible. Despite the incredible performances by both Aborted and Septicflesh the whole venue was longing for Kataklysm. With a brutal sound and an amazing stage presence the Canadian band finally started. Almost no metalhead in attendance could keep his or her hair from banging. Despite their already amazing performances at Wacken and Summer Breeze 2015, this evening surpassed even those. Forceful Kataklysm shreded through new and old songs alike and won over the crowd completely. Only natural then that the crowd followed suit when the frontman asked them to crowdsurf. The statement that concerts on a Sunday sucked, and everyone should party like it was Saturday was met with equal excitement and with loud shouting the moshing and drinking continued. Therefore the band fetched their manager on stage who promised that the next Kataklysm concert in Munich would be on a Saturday. Better believe we will remember that next time!
After that short breather the Canadian band played songs like "Soul Destroyer" or "Where the Enemy Sleeps" which are memorable especially because of their brilliant drum beats. As the memorable Death Metal evening slowly came to a close everyone was waiting for two songs which could not be missed out on. As "In Shadows and Dust" and "Crippled and Broken" played, the crowd finally and ultimately lost it and gave their all in the moshpit. The "Of Ghosts and Gods" tour was the perfect start for the concert year 2016 and a special highlight for Death Metal which will be remembered for a long time. 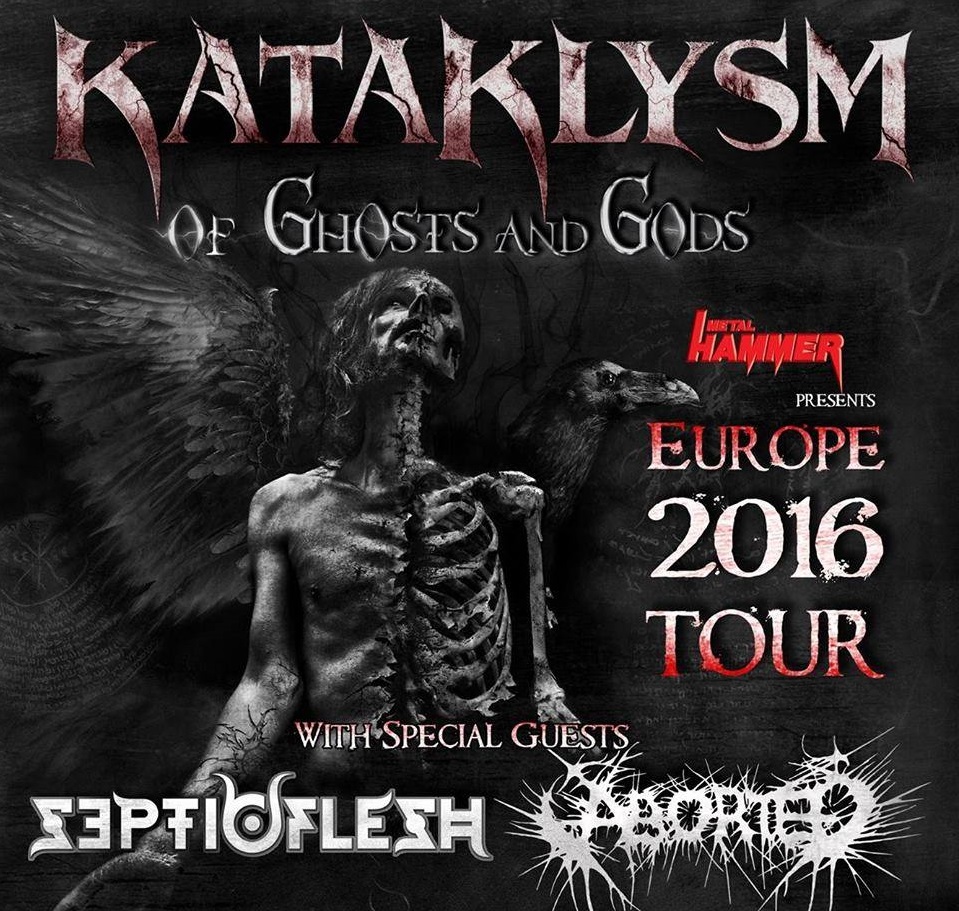