Infected Rain are far from the overly manufactured metal many of us have grown accustomed to.

A combination of female screaming, hard ri s and samples created the individual style of Infected Rain. The band was formed in 2008 and made their  rst appearance on stage on August 3, 2008, performing in a concert dedicated to Slayer. At the end of the same month Infected Rain recorded their  rst demo CD, which consisted of three songs: With Me, Parasite and No Idols. Over the next 2 years the band appeared in several concerts in Moldova, Romania and the Ukraine. Infected Rain took 1st place at the Big Up! Urban Fest in 2009 and continued the stream of its successful performances at the Forest Kap in 2010 and 2011. In summer of 2009 the band released their EP, which included six songs: Judgmental Trap, Panika, No More, Escape, Go Away and Homeless. Their  rst music video was for the song Judgmental Trap and was shot in winter of the following year. November 25, 2011 was marked by the release of the band’s  rst album, entitled Asylum. After that the band went on a tour in Romania to support the album. In January 2012 the band released its second music video for the song At the Bottom of the Bottle and shortly after that performed at the Metal Special Fest as a headliner. In June, the band played at OST fest 2012 in Bucharest on the same stage with Dimmu Borgir and Motley Crue. Shortly after that they released a new music video for the song Me Against You, collaborating with Moldova Extreme Moto Cross. Then on March 8th, a music video for the single Stop Waiting came out. In the autumn of 2013 the band toured Romania, Russia, Ukraine and Bulgaria as their  rst big tour. May 15th of 2014 the band released the second album called "Embrace Eternity". Later, in September and October was their big European tour in which they visited 12 countries. January of 2015 was marked with the release of 2 more music videos for the album "Embrace Eternity". At the same time the band never stopped concurring new countries and headlining big festivals in Europe. 2016 started with the release of their new music video for the single Serendipity that gave a start to a new, heavier era for Infected Rain. Serendipity and 3 other singles that the band released with the beginning of 2017 are part of the third album called “86” that was released April 20th 2017. 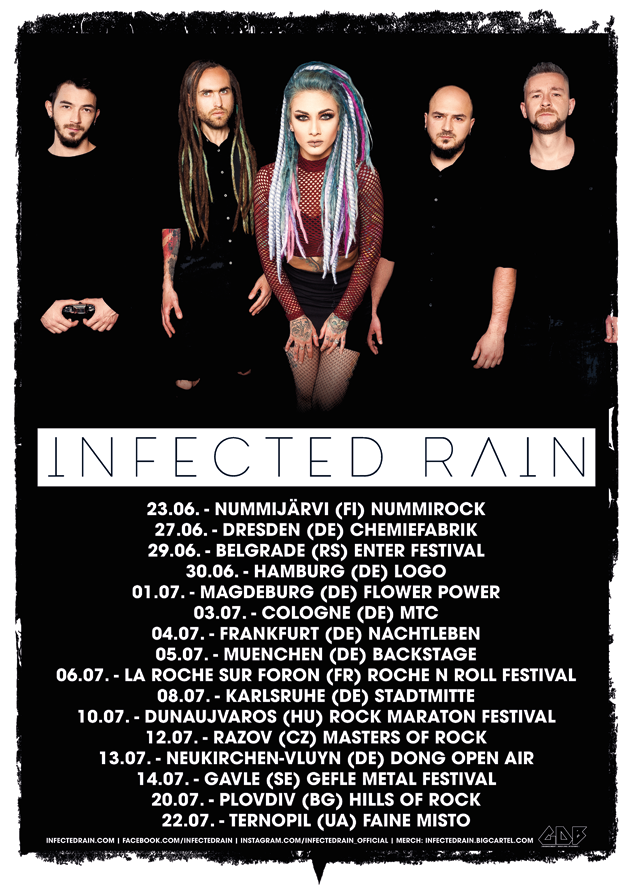