HEADBANGERS BALL – The original will have a loud and live comeback!

Headbangers Ball - a name that bears pure heavy metal nostalgia - will come to life again! By the end of this year, MTV’s classic 80’s show shall return as a series of events. MTV Headbangers Ball, hosted by Continental Concerts in cooperation with MTV, is going to tour Europe. Just like the classic TV show presented by Vanessa Warwick, the festival tour is going to embody the cutting edge and timeless essence of pure f**king metal!

Headliner of this festival tour will be U.S. metal gods ICED EARTH! Formed in Florida in the mid-80s, the band celebrated its international breakthrough with the album “Burnt Offerings”, which defined the band’s trademark style between power and thrash metal. Their last album “Plagues Of Babylon” came out in 2014 and charted on #5 in Germany. To this day, the band is recognised as one of the most successful traditional metal acts.

Finish headbangers ENSIFERUM are considered one of the most successful musical exports from Northern Europe. Integrating traditional instruments such as the Finnish kantele into their rousing, aggressive metal sound, they can rely on a rabid fan-base and recently scored #1 in the Finnish charts as well as #15 in Germany for the latest album “One Man Army”.

Earlier in this year Canadian / American Death Metal Act KATAKLYSM completed an incredibly successful tour throughout Europe covering forty four cities in support of their new album “Of Ghosts And Gods”. The band is considered as one of the biggest and well-established acts in Death Metal for many years now and stands out through their characteristically musical interplay between aggressive drum sounds and melodic guitar tracks and crushing grooves , the band recently won the Juno award in Canada (Equivalent to a grammy) for best "heavy metal album of the year" for their latest album "Of Ghosts and Gods "

Modern metal outfit UNEARTH from Massachusetts/USA completes this diverse and absolutely crushing billing. The band’s most recent studio album “Watchers Of Rule” was released in 2014 and this furious live act will perfectly open up the MTV Headbangers Ball tour.

MTV Headbangers Ball was broadcasted for the first time on April 18th, 1987 and quickly became one of the most popular shows on MTV. The show was on air for eight years in the USA and six years in Europe. Besides music videos, the show also featured interviews with bands as well as specials on particular acts or festivals. The “Triple Thrash Treat” section created a TV platform for more extreme forms of metal, a tradition continued by this series of live events. Just like the TV show, the festival tour aims at presenting the endless variety of metal music offering a platform for established artists as well as newcomers. 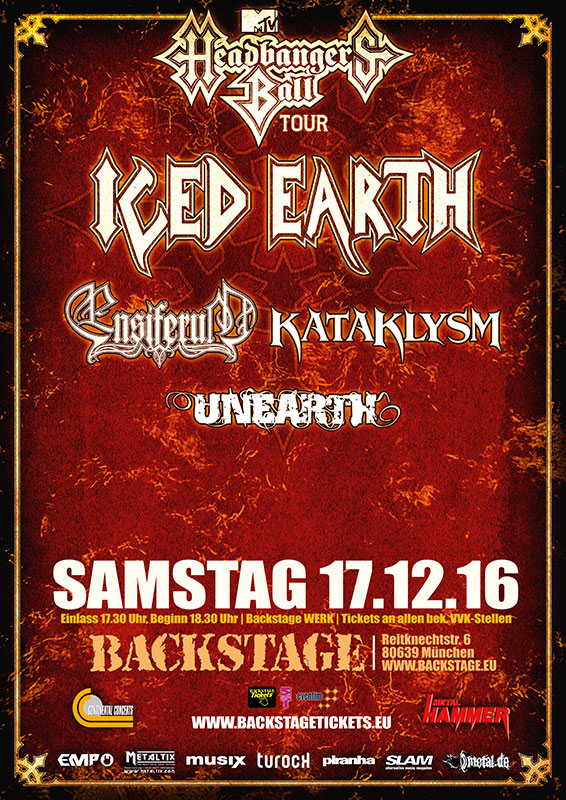