HATESPHERE - Bio Facebook
Aggressions, drinking and hate! The Danish legends of thrash metal set their sights on old-school values on their latest masterpiece, The Great Bludgeoning, which will be released September 2011 via Napalm Records.

Formed in Arhus Denmark by guitarist Peter “Pepe” Hansen in 2000, HateSphere quickly overpowered the Danish metal scene, while concurrently setting an immeasurable new standard for thrash metal domestically and abroad. HateSphere’s first three albums, HateSphere, Bloodred Hatred, and Ballet Of The Brute upgraded the band’s status from local sensation to Europe’s hottest up and coming thrash quintet. Under the leadership of Scarlet Records, HateSphere toured Europe with The Haunted in 2003 and again with Exodus in 2004, while also turning heads at Wacken Open Air, With Full Force, and Hellfest Festivals.

In 2005, HateSphere inked a deal with SPV Records and assembled a production team of established Danish producers; including Tommy Hansen, Jacob Hansen, and Tue Madsen. The Sickness Within was released in September of that same year; receiving raving reviews from the worldwide metal media. The pure ferocity, complexity, and brutal grooves enshrined in the album, landed HateSphere on multiple tours of Europe with Kreator, Morbid Angel, Soilwork Dark Tranquillity, and Chimaira. In addition to headlining shows in support of The Sickness Within, the band made appearances at Wacken Open Air, Metal Camp, and Roskilde Festival.

HateSphere continued to increase its’ profile on an international level by touring Japan, co-headlining the UK with Gojira, and headlining the first edition of The Danish Dynamite tour with Raunchy and Volbeat: marking the first ever international tour dedicated to showcasing Denmark’s most talented metal bands. HateSphere again made history by being the first Danish band to tour China. Following the 2007 release of Serpent Smiles And Killer Eyes, HateSphere yet again hit the road headlining Europe with Aborted and Dagoba, which was followed by successful performances at Wacken Open Air and Roskilde Festivals and a support tour of Poland with Behemoth in September.
Serpent Smiles And Killer Eyes also shot up to position 26 on the Danish National Music Charts: an unprecedented achievement.

HateSphere is tough to the bone! When they entered stage at the 2007 Danish Metal Awards, all members were new, except for one. All doubt caste over the band’s lineup instantly shattered as the band hit the ground running with a month long co-headlining tour of Europe with Swedish legends Dismember. The songwriting for a new album begun, and “To the nines” was released March 2009. Produced again by Tue Madsen (The Haunted, Sick Of It All, Moonspell, Dark Tranquillity) the album was received incredibly well. A headliner tour of Europe, festival appearances on a.o. Metaltown in Sweden, co-headlining the Headbangers Ball Tour in Denmark and last but not least: winner of “Album of the Year” at the Danish Metal Awards in 2010. HateSphere was indeed back in business.

Once more HateSphere changed their line-up but it didn’t stop the band - quite on the contrary. Esben “Esse” Hansen (As We Fight, Numbnuts) was picked up as the new vocalist, Mike Park (Mercenary) took over the drums, and last but not least Jimmy “The Talent” Nedergaard (Gob Squad) was presented as the groups new bass player. Two US-tours with no less than The Black Dahlia Murder and Nevermore was the best way to show that this band is unstoppable.

With this new and very experienced line-up the songwriting for the new album begun, and everybody agreed on the concept: More metal, less bullshit. Again Tue Madsen was given the responsibility to produce the album, and Mircea Gabriel Eftemie (Mnemic) created the cover artwork.

... and now it’s here. The seventh album has got the title “The Great Bludgeoning” and marks a comeback for a more old-school and dirty HateSphere sound. The album is a merciless and brutal inferno that will leave a trail of destruction in its wake. Guitarist Peter "Pepe" Hansen and his accomplices confirm the band's supremacy and reach new heights with blistering tracks such as "Venom", "Need to Kill", and "Smell of Death". High-speed riffs, furious solos, and grueling drums are the foundation of HateSphere's sound, in which technical prowess and appeal brilliantly unite. Esben "Esse" Hansen, the new man on the mic, emerges as a driving force, using his aggressive vocals to push the band even further. As a result of this perfectly balanced cooperation, HateSphere delivers a compact and uncompromising album that will outflank even the band's previous classic releases. The ultimate Danish thrash death metal manifestation!

Again this year HateSphere will co-headline the Headbangers Ball Tour in Denmark, and both American and European tours await! 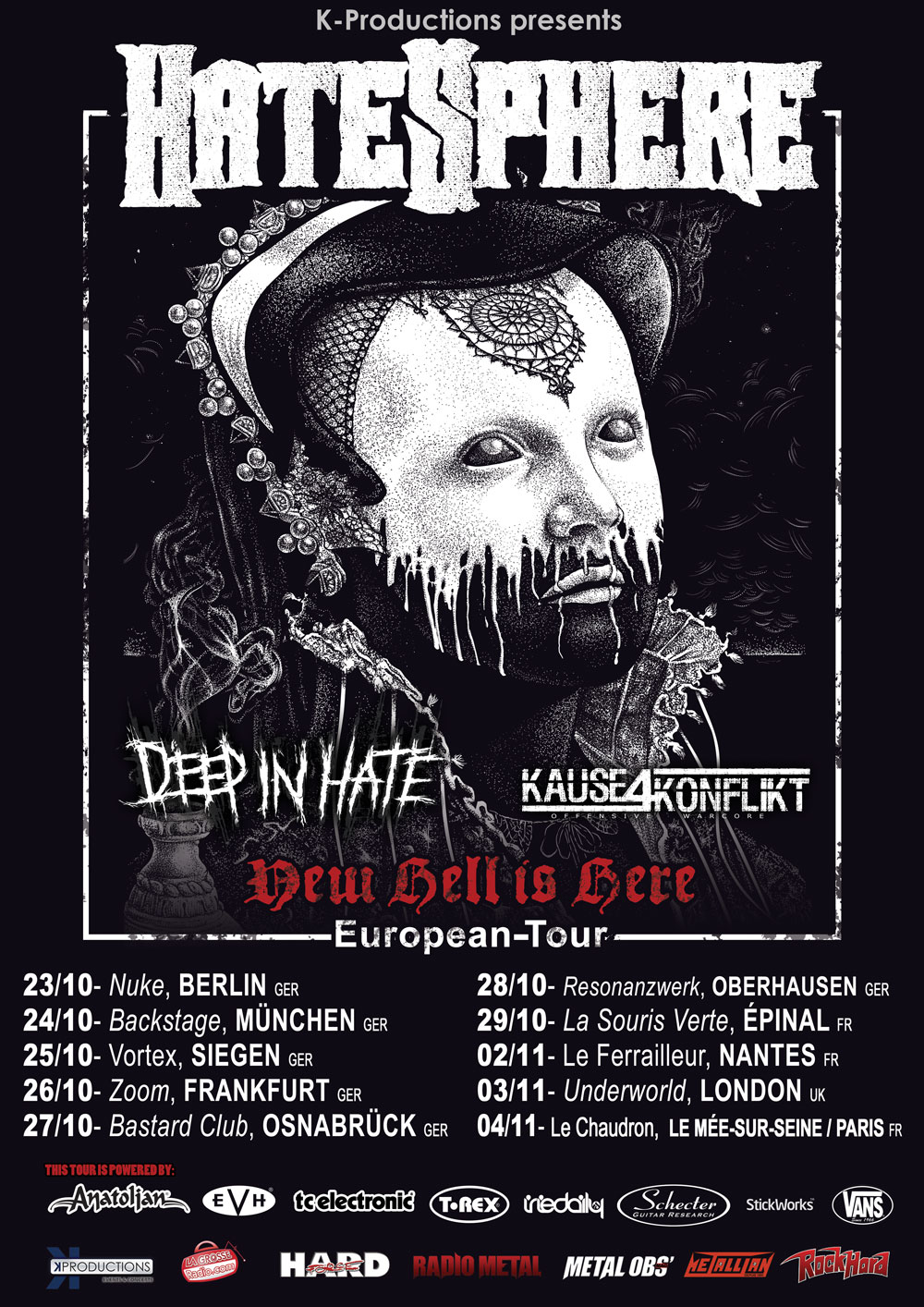