Halestorm brought Into The Wild Life to Munich

Two weeks before the release of their new album INTO THE WILD LIFE, Halestorm made their way back to Munich on March 28th and celebrated the night with hundreds of their fans at Theaterfabrik. Together with Wilson and Nothing More, they brought a great show full of Rock’n’Roll to the Bavarian state capital.

First act of the evening were Wilson, a rock band from Detroit, Michigan, who began the party right away. With their catchy lyrics and passionate performance, it took them no time to thrill the people who were already there. Effortlessly, frontman and singer Chad Nicefield and his band members made the crowd go wild with songs like their new single “Hang With the Devil” (2015, LP is to be released in summer) or the AC/DC cover “Back In Black”. During their performance, the five guys clearly lived up to their reputation as party animals!

Following on stage were Nothing More, a San Antonio, Texas, based alternative metal band which often reminded the listeners of a British indie rock band. It was their first time in Munich but they already had a fan base which was excited to hear songs like “Salem” (THE FEW NOT FLEETING, 2009), “Mr. MTV” or “This Is The Time (Ballast)” (both NOTHING MORE, 2014) live. Sadly, the interaction with the fans was very low despite the great show the four delivered. And even though their sound was cool and the guitar riffs were good, the voice of vocalist and former drummer of the band Johnny Hawkins was thinner than that of Lzzy Hale. Nevertheless, the fans were enthralled to hear and see Nothing More perform songs from mostly the latest two of their six already existing LPs.

“Mayhem” from the upcoming album INTO THE WILD LIFE (2015), a song the band describes as pure fun, was the opener with which Halestorm entered the stage. Older songs like “Mz. Hyde” (THE STRANGE CASE OF…, 2012), “I Get Off” (HALESTORM, 2009), and “Freak Like Me” (also THE STRANGE CASE OF…, 2012) followed and made the crowd go wild. Throughout the entire performance, Lzzy Hale’s incredible stage presence led through the evening, often talking to the fans and entertaining them endlessly. Next to her wild and strong side, the front woman proved that she also has a softer one which was especially present during the performance of the Little Big Town cover “Girl Crush” or their own song “Familiar Taste of Poison” (HALESTORM, 2009). But not only Lzzy Hale showed her incredible talent. Her brother and second founding member of the band Arejay Hale played an outstanding drum solo, combining several rock anthems and entertaining the listeners with his wit, talent and not least with his big sticks. After performing “Daughter of Darkness” from their self-titled LP, it was guitarist Joe Hottinger’s turn to show his musical ability as well, bending chords and letting some great riffs sound. Of course, the band from Red Lion, Pennsylvania, also played their Grammy award winning song “Love Bites (So Do I)” (THE STRANGE CASE OF…, 2012) as well as more songs from their new album INTO THE WILD LIFE like “Amen”, “Apocalyptic” or “I Like it Heavy”, giving the fans a good insight of what they can expect from the new release.

After approximately one and a half hours, Halestorm ended the “Rock Show” with “Here’s To Us” (both THE STRANGE CASE OF…, 2012) - a more than fun and successful show that will hopefully be repeated in the near future.

Watch our interview with Lzzy Hale and Joe. 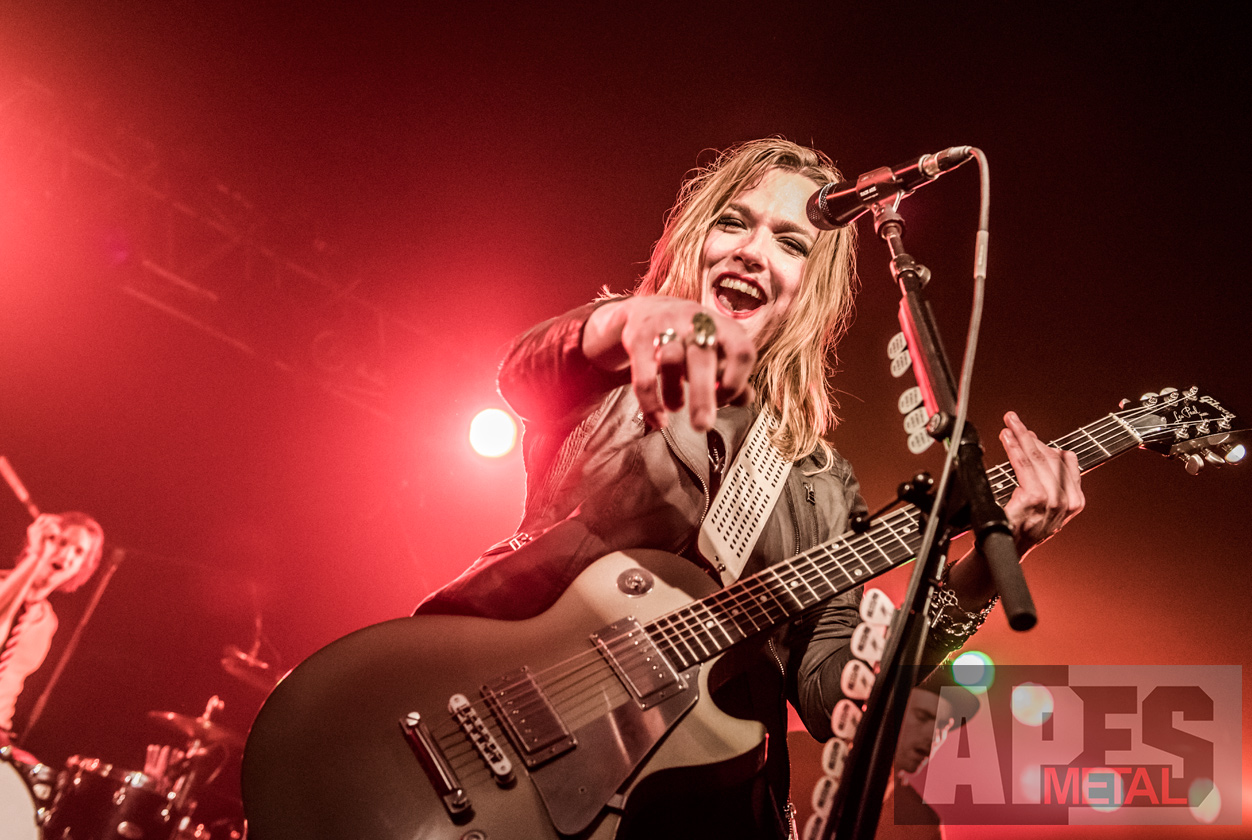