Wacken, 12/06/2018 –Wacken Winter Nights (22nd to 24th of February 2019) are announcing ten new bands to complete next year’s billing and the festival releases an updated version of the running order.

According to German tradition, Saint Nicholas is arriving on December 6th to bring treats to all the children – provided they have behaved nicely or else his helper named Knecht Ruprecht will deliver a spanking. Now, as you all have been exceptionally good, the Saint has ten new bands in his big bag for the Wacken Winter Nights 2019 – including two attractive headlining acts.

Sunday’s billing has now been upgraded with FAUN and FEUERSCHWANZ as crowning highlights.

FAUN from the Bavarian capital of Munich have already thrilled audiences for nearly two decades. Their catchy melodies, use of old traditional instruments, and lyrics influenced by the writers of the romantic period have been wrapped into a modern garb woven from folklore, rock, and pop music.

FEUERSCHWANZ are invoking the power of parody. Not willing to grant any kind of pardon, those Franconian Knights of the Square Table are poking fun on any topic medieval, metal or simply deemed worthy of a stab. Yet even if you are not fluent in German or not even able to understand a word, their musical prowess stands for itself. Hold those mead hammers high!

Being open minded and welcoming to all, Wacken Winter Nights are providing entertainment for nocturnal creatures as well and have set up after-show parties at the Wackinger bar in the village. SKALDENMET from the nearby city of Hamburg will wake up tired warriors with a hefty dose of Viking metal on the night from Friday to Saturday. They are being followed by their compatriots INCANTATEM, who are delivering high pressure folk metal during the next night. At the same location, local heroes FORGOTTEN NORTH will kick off proceedings with a pre-party on Thursday by rocking the Wackinger with melodic Viking anthems.

A daily host of jugglers, fire-breathers, duellists, vagrants, and other travelling entertainers are furthermore contributing to the medieval fairy-tale atmosphere of this winter festival. This includes musical acts that will be roaming through the market and mystical wood on each day as well. The electronic duo DRAGOL from the city of Münster will relate dark stories of magic and mayhem. HYTTIS from the (not so) alpine area of Bookholzberg in Lower-Saxony are adding medieval market flair with bagpipe and drum played by Andreas and Carola Hüttenmüller. DIE PRESSGËNG from the city of Truzhaven, which even Google cannot find on the map, have sold body and soul in exchange for nautically themed songs. These four family-friendly pirates are entertaining with accordion and an all-male choir. MACCABE & KANAKA also stand accused of piracy and are on anchor in the ancient Hansa city of Lübeck. This German-Irish troupe will take you at the high seas with honest folk music and sailors’ songs. As opposed to the previously mentioned acts, medieval music inspired COMES VAGANTES are returning to Wacken as long- time fan-favourites only on Friday and Saturday.

An updated version of the RUNNING ORDER is being provided at the link below:
www.wacken-winter-nights.com/de/info/running-order

Passes for all categories and day-combinations are available here:
http://wacken.click/wwn19tix061218

3-day passes are going fast and stocks are below 20% by now. We recommend to buy tickets early.

Further information about side-shows and infrastructure will be provided soon. 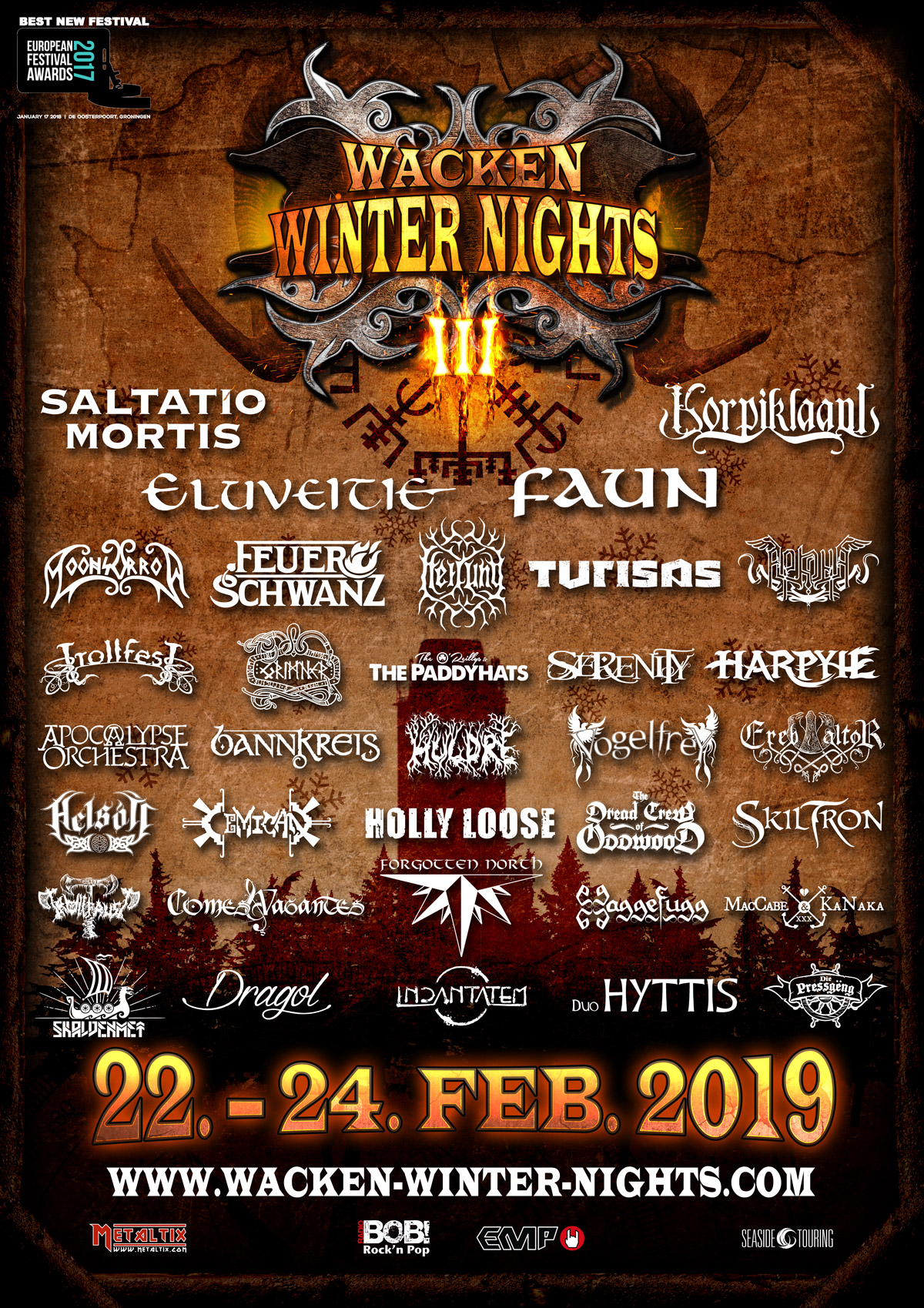