KILLSWITCH ENGAGE has been published a new song! "Strength Of The Mind" is the first release since "Disarm The Descent" back in 2013. Watch the video here.

“We are very pleased to have ‘Strength of the Mind’ finally released. It is a big moment to have this be the first listen to the album. The video visually captures a bit of the anxiety and chaos that the song touches on lyrically. It is almost a bit surreal and dream-like with the camera effects, called ‘whacking’. It is always a pleasure to work with McFarland and Pecci, as they are both artists who give it their all with no shortcuts. Watching Mike work the camera live, while Ian paces around and directs, is a very involving and creatively satisfying experience.”

The new album will be release in spring 2016 - more information will follow soon.

By the way: KILLSWITCH ENGAGE will be on the cover of the American Revolver Mag (release: Dec 22) - clothed as Star-Wars-Characters (see image). 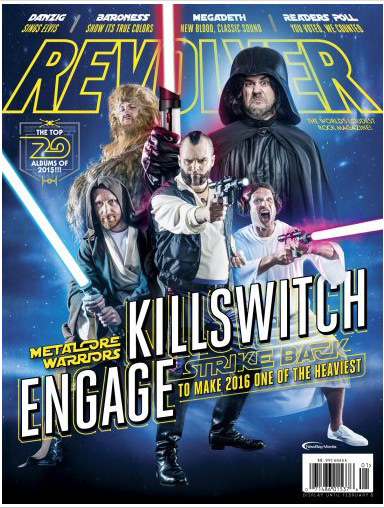