(2010) - Megalodon was spawned by the creative minds of two long-term friends, Ruan Jordaan (Odian, Marching Dead) and Nuri Grobbelaar (Marching Dead, Tides of Oblivion). After discussing the project for a few years, it was finally given life. Together with Thomas Theron (Emboldened, Odian) and Alex Toua (Revenge by Dawn, Beeldenstorm) the band became an entity of its own in a very brief period. Finally, with the addition of Louis Henn (The Broken Result, Forever Will Burn) on guitar in November 2010 the line-up was completed. Megalodon brings you a (planet) crushing 8 string metal sonance.

(2011) - Megalodon tightened the grip on their genre which saw the departure of drummer Alex Toua. The band achieved many small victories by this time including the release of their first singles, Cessation and Umbilical Embroidery. These two songs paved the way for the future sound of Megalodon and were received with high praise in the metal community. These victories allowed them to gain a small but very dedicated number of fans. However, with one member down, any plans of playing live came to a standstill. Louis turned to long-term friend, and previous band member and drummer, Dane Vincent Canterbury (The Broken Result, Betray the Emissary) to audition for the band. Louis and Dane have a history of dabbling in the more progressive and experimental metal genres. On the night, Louis noticed that Dane recently acquired a tattoo of a big shark and it was known then that the stars aligned once again for Megalodon. They were back to a complete line-up and ready to crush.

(2012) - With the hype created by their singles in 2011, the band managed to get the attention of Metal4Africa, a local gateway to all things metal in Africa. The band was asked to play their debut show at Metal4Africa's Summerfest '12, a bi-annual metal festival in Cape Town, organized by Metal4Africa. Never has any band featured on the M4A stage with no shows under the belt. Megalodon played to a full house and left the fans wanting more. Megalodon is most likely the first South African band to utilize 8 String guitars on home turf (and most likely the African continent). The success was quickly followed by more shows as well as opening for the highly acclaimed Celtic metal outfit, Haggis and Bong for the launch of their album 'Of Myth and Legend'. Whiplash 2012, one of Cape Town's longest running annual events this time hosted by Metal4Africa, witnessed the earth-trembling act in December, as well as Rock the River '12, a growing new year's festival in Cape Town. Megalodon ended the year with a bang and were chosen to play RAMFest Cape Town 2013, the biggest alternative festival in South Africa, in the company of Bring Me the Horizon and Rise Against.

(2013) - In March, Megalodon smashed through social media and local metal blogs with the release of their début album 'Darkness in Sonance'. Backing the release was Burning Tone Records, a local non-profit organization unifying quality local metal releases under one brand. Shortly thereafter, the band was chosen by MK Ondergrond (Local South African Music Video Channel) to participate in the first ever Wacken Metal Battle South Africa. This event sees one winning band representing South Africa at the biggest annual metal festival in the world, Wacken Open Air in Germany. Megalodon crushed their way to the finals and performed to an eager fan base in Pretoria for the first time on remote soil. Sadly, they dropped out at the Final but this did not stop them. They would later return to the stage at Metal4Africa's Winterfest '13, and perform to a capacity crowd at the renowned Klein Libertas Theatre. The band also performed at the first Burning Tone Records' display of talent event, Blitzkrieg, which showcases all Burning Tone Records bands on one night. 2013 was ended with the release of a new single entitled 'Apex', showing that the band was far from stopping this machine.

(2014) - Megalodon continued to roll mountains with the release of another single entitled 'Obliteration by Incorporation'. The single was followed by a rejuvenating performance at their first show for 2014, The Monolith, at Buckleys Bellville. At this point the band decided it was time to expand their territory and play shows outside of their home turf, leading to their first national tour namely "The Carcharodon Voyage" with Messiah Complex as supporting act. Megalodon and Messiah Complex had become a known force for brutality in the metal community. This led to the release of a third single titled 'Sky Burial' that featured both front men Thomas Theron and Alex Wiese. The tour established their footprint in South Africa's biggest city, Johannesburg, where they played Rumours Rock Lounge, Wolmer Bush Lounge and Sundowners in 3 consecutive nights. However, due to a double booking with Fokofpolisiekar at Sundowners, Megalodon was cancelled but the band would have none of it and quickly arranged themselves as the opening act for the highly acclaimed South African Afrikaans Rock outfit, Fokofpolisiekar. Playing to a full house at Sundowners and selling out all Tour merchandise, the band proved that they don't back away from anything. The year was closed with a stellar performance at Burning Tone Records' Blitzkrieg II.

(2015/2016) - In these two years, the band focused primarily on completing their second full length album with 2015 seeing the release of another single entitled "Gravaton" which showed the diversity and maturity of the band’s sound since its inception in 2010. They returned to the stage for Blitzkrieg III, Burning Tone Records' talent showcase event. While continuing to play high profile shows like Atavism at Buckley's Bellville and Metal4Africa's Summerfest '16 in 2016, the band's growth became ever more noted. However, good times often don’t last and 2016 saw the emotional departure of founding member and guitarist, Ruan Jordaan. Although this was a major setback and demotivator for the band, the duties were picked up by Andrew Lambert (Messiah Complex, Animus Fall) and the group continued almost unhindered and with new force. This new force came in the form of a fully digitized and automated backline, which the band showcased on a series of YouTube videos leaving their viewers with their jaws dropped. It became clear that Megalodon had now reached a level of tightness and professionalism that stood out from the rest. With unified attire, an automated digital backline and relentless determination, Megalodon was ready for 2017. They closed 2016 with the announcement that the material for their new album were completed.

(2017) - The year started with an atmosphere unlike any other with Megalodon announcing that the recording of the Drums, Bass and Guitars had been completed for their second full length album. A series of screenshots of the recording process were shared by Louis on the band’s Facebook page over December 2016 and January 2017, capturing the audience once again and stirring up hype. The band announced that the vocals would be wrapped up in the coming weeks. But the stars aligned again for these 5 men. Megalodon re-entered the Wacken Metal Battle South Africa for a second time. Remembering everything they'd learned from the first experience and bringing their new energy to the stage, they won the first heat at Aandklas, Stellenbosch to secure their spot in the final at Rumours Rock City, Johannesburg. Thereafter, they played We Came to Build 2017, a new initiative by local organization, Build Your Scene. May 2017 saw Megalodon at their ultimate high as they performed with vigour and confidence the set that won them the Wacken Metal Battle South Africa 2017 Final, securing their slot at Wacken Open Air 2017, the biggest metal festival in the world. Followed by this monumental victory, the band announced the title and release date for their upcoming second full length titled "Illusion of Origin" released on 07.07.2017. 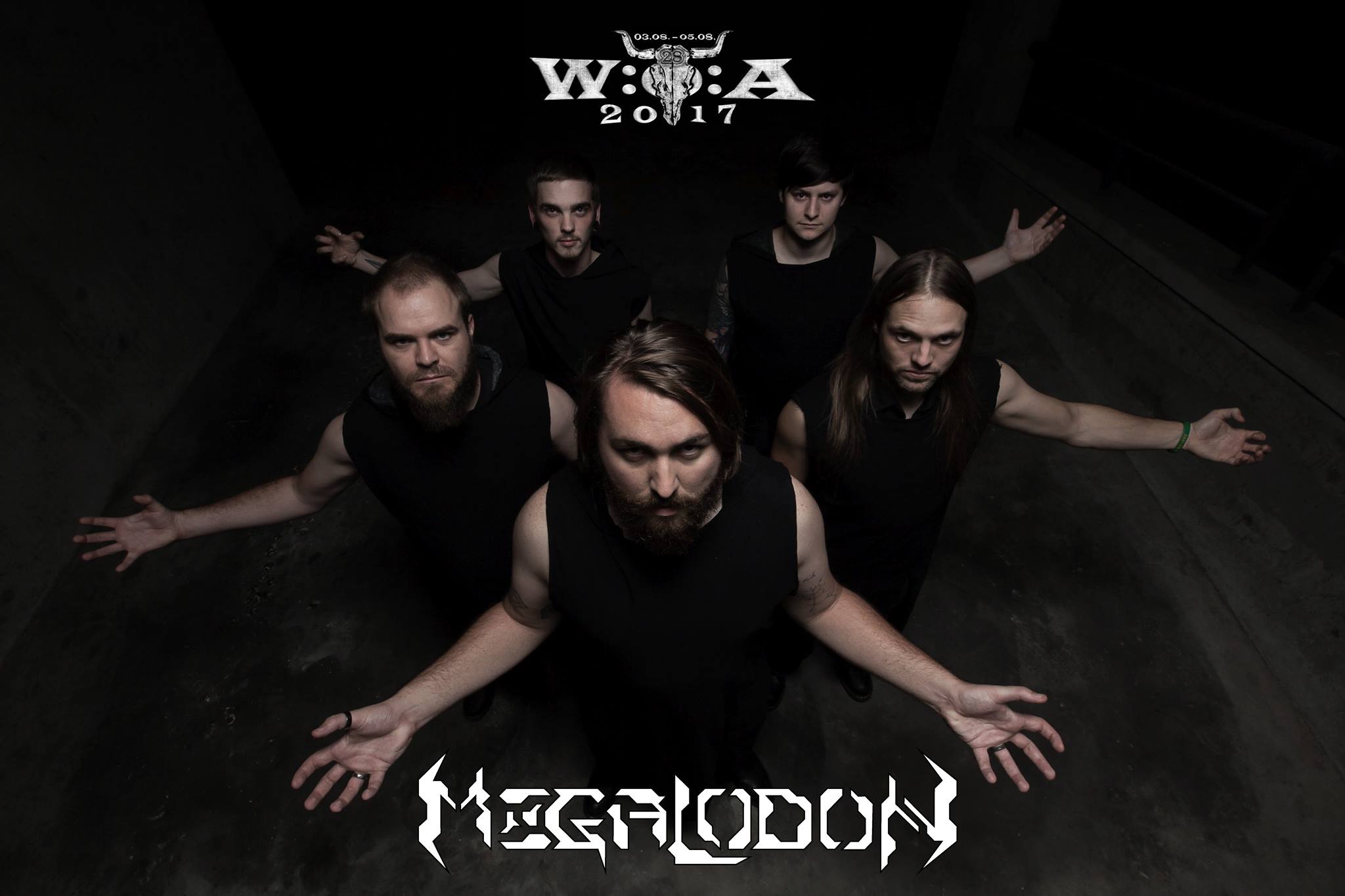